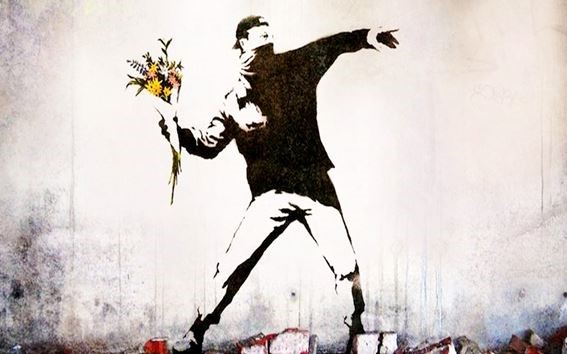 It all began in London on 23 June 2007. It was at the end of a performance given by Béru, a street artist, at the Greenwich + Docklands International Festival, that he met another street artist on a pavement corner. The two men talk and François Berardino decides to follow him to his studio. Although Beru cannot remember the area where the studio is located, he remembers that this large space covered a multitude of pictures, drawings and paintings. The meeting was brief, but the stranger offered François Berardino two drawings.

A few years later, when he discovered the book on Banksy “War and Spray”, Beru realised that his drawings were made by Banksy himself. Fascinated by the universalism of his work and touched by the subjects he tackles, his anti-war stance, his humanism, his political commitments always tinged with humour, he has been collecting everything that revolves around Banksy’s work for almost 10 years, as far as his budget allows. This internationally renowned stencil artist is also a painter, graffiti artist, director, writer, poet and illustrator. Always working for his ideas with strength, poetry and humour, he continues to keep his work a secret. This collector has collected more than a hundred objects ranging from illustrations on vinyl to stickers, stencils that Banksy has put up in the street, posters from the exhibitions he has mounted, postcards, drawings, lithographs, stencils in small print runs.

Work with us or just say hello, we’d love to talk to you.

Rencontres et contrastes
Scroll to top
We use cookies to guarantee you the best experience on our site. If you continue to use the latter, we will consider that you accept the use of cookies.Ok